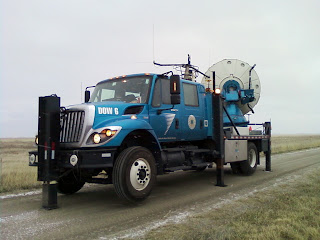 Although this was primarily a practice deployment, we were able to sucessfully sample the light snow showers that passed through the Red River Valley.  Two examples of the data we collected are posted below.  I apologize for the poor quality... these were captured with a cellphone camera! We will post better images later after we download the data.

Range Height Indicator (RHI) plots (see image above) allow meteorologists to view the atmosphere as if you were viewing the side of a piece of cake. The horizontal axis corresponds to the distance from the radar. In this example, the radar is located on the left hand side. The vertical axis corresponds to the height in the atmosphere. In this RHI, a thin layer of snow showers can be seen at levels at 2 kilometers and below in the atmosphere. Aloft, the radar can see ice phase clouds known as Cirrus at approximately 6 km.

Meteorologists can also use radars to produce Plan Position-Indicator (PPI) plots. This allows us to view the atmosphere completely surrounding the radar. Using the cake reference used to explain the RHI, this is like viewing the complete cake from above (well not exactly... see the below figure).   In reality, we are displaying a complicated slice of the atmospheric cake where data is higher in elevation as you get farther from the center (the radar). This occurs because the radar is pointed upward at an angle. 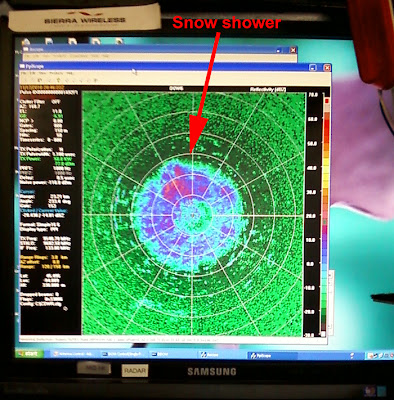 In the example above, we can see a snow shower (the purple colors) to the N/NW of the radar which is in the center of the plot. As the snow shower passed over the DOW, the number and size of snowflakes increased drastically.

For more info about RHI and PPI plots, check out these other descriptions/example.
http://ww2010.atmos.uiuc.edu/%28Gl%29/guides/rs/rad/basics/cnmod.rxml
Posted by SNOwD UNDER at 10:13 PM